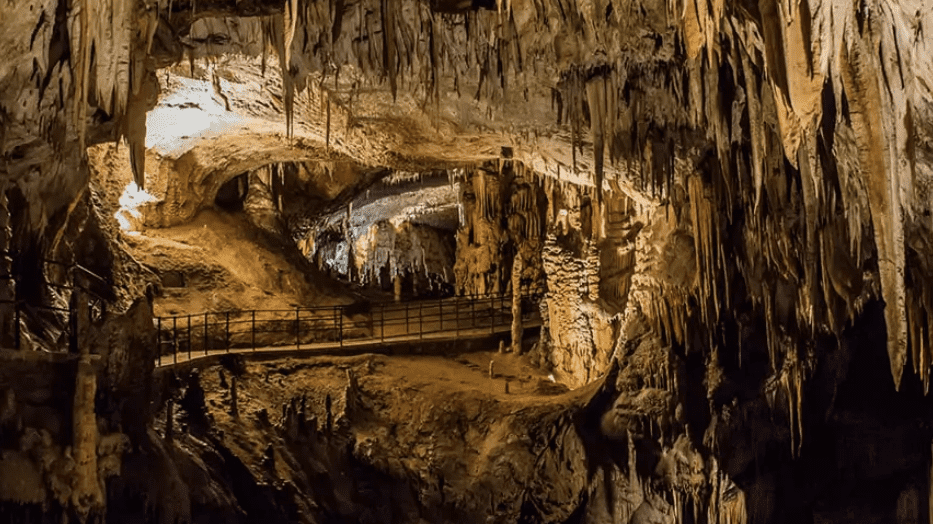 Slovenia has a beautiful underground world. The caves are very impressive and you really shouldn’t miss them.

This impressive cave was formed by the river flowing through it: the Reka. The river flows 50 kilometres above ground and then goes underground in the Karst area. It is the largest underground ravine in Europe and is a UNESCO World Heritage Site for a reason.

If you visit the cave, you will first have to walk with the park’s guides to the entrance, which is about 500 metres away. When you go inside, you will first come to the Tiha Jama, or silent cave, where you will encounter numerous stalactite formations.

After that, you come to the underground ravine of the Reka. There is an illuminated walkway along the rock face and you will cross the Cerkvenik bridge, which is 15 metres above the river bed. The path is partly a sloping slope, and the rest are stairs. So nice climbing and scrambling.

During the tour, the guide occasionally tells some things. Whether you can see and hear the river depends on the weather. Apart from the illuminated walkway, there is no lighting. You can see the river only by indirect light from outside. When it has rained a lot, there is more water in the river, you can hear it better than if there was a dry spell.

When you almost get outside, and the guide points it out, you may take some photos. Outside, you have to make a choice, will you walk (back), or take the lift up? With children, we definitely recommend taking the lift.

Despite these caves not being as well known as Postojna’s, it can be crowded. You enter the cave in a large group and you are not allowed to take photos. The guides cannot speak Dutch, which is a pity for the children, but if you can speak English or German, it is easy to follow. This way, the children can practise their language skills!

This cave is the most accessible of all the caves in Slovenia, and it is the most visited cave in Europe. You can take a large group through the cave in a little train, very special and fun for the kids. Here you can see the beauty of the Karst landscape, including stalactites and stalagmites. After a 2-kilometre ride, you continue on foot through the caves. The guide tells some interesting things, and perhaps a fun story.

You can combine your visit to the cave with a visit to Predjama Castle, or explore the entire Postojnska jama park. The park includes the castle, as well as Hotel Jama. Here, besides staying overnight, you can visit secret rooms. These rooms show the history of the secret service of the former Yugoslavia.

The park also includes a vivarium, where you can see baby dragons! Unfortunately, they are not real dragons, but that is what the Olms are called because they look quite similar. These special little animals live their entire lives in the caves. They are the only vertebrates in Europe that live exclusively in caves.

There is also an exhibition on the Karst and the caves. Its history is shown in a modern and interactive way.

If you are curious about how a miller spends his day, you can do so at the Modrijan Homestead near the Pivka Ponor River.

We use cookies on our website to give you the most relevant experience by remembering your preferences and repeat visits. By clicking “Accept All”, you consent to the use of ALL the cookies. However, you may visit "Cookie Settings" to provide a controlled consent.
Cookie SettingsAccept All
Manage consent

This website uses cookies to improve your experience while you navigate through the website. Out of these, the cookies that are categorized as necessary are stored on your browser as they are essential for the working of basic functionalities of the website. We also use third-party cookies that help us analyze and understand how you use this website. These cookies will be stored in your browser only with your consent. You also have the option to opt-out of these cookies. But opting out of some of these cookies may affect your browsing experience.
Necessary Always Enabled
Necessary cookies are absolutely essential for the website to function properly. These cookies ensure basic functionalities and security features of the website, anonymously.
Functional
Functional cookies help to perform certain functionalities like sharing the content of the website on social media platforms, collect feedbacks, and other third-party features.
Performance
Performance cookies are used to understand and analyze the key performance indexes of the website which helps in delivering a better user experience for the visitors.
Analytics
Analytical cookies are used to understand how visitors interact with the website. These cookies help provide information on metrics the number of visitors, bounce rate, traffic source, etc.
Advertisement
Advertisement cookies are used to provide visitors with relevant ads and marketing campaigns. These cookies track visitors across websites and collect information to provide customized ads.
Others
Other uncategorized cookies are those that are being analyzed and have not been classified into a category as yet.
SAVE & ACCEPT